I’ve been made aware of this chart, which I find interesting. 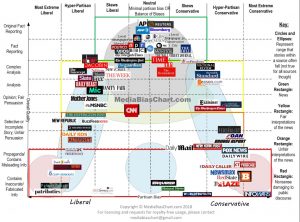 I’ve read through much of the author’s commentary on how this chart was created, and I generally agree that she has done an admirable job in her methodology.  I largely agree with the relative position of the media sources to each other and where they fall along the Y-axis.  But I disagree with where the sources are placed along the X-axis.  As an example, I would not (nor do I know any conservatives who would) consider NBC, CBS, or ABC as “neutral”  Most conservatives would put the “neutral” line about where the dividing line between “Neutral” and “Skews Conservative” currently is.  The rest of this article explains why we would state this.

The author uses three criteria for ranking where individual articles and the media sources in general fall on the chart: truthfulness (statements of fact versus opinion), expression (the language used to make the statement), and bias (is the statement intended to move the media consumer toward one extreme or the other).  This is good, but while would consider the first criteria more or less objective, the expression and bias determination can be decidedly more subjective (Note: this is my opinion).

But more important is what’s left out of the criteria?

She gives a nod to the idea that information could be left out that would lead the consumer to a different conclusion, but I believe that is bigger factor that she gives credit to.  I would consider this to be a fourth criteria she should consider:  what confounding information is not presented in the article?  Conservatives certainly believe that the mainstream media refuses to cover, or covers incompletely, issues that are important.

One of the nice (if you can call it that) about being a conservative is that you don’t have to go looking for the liberal viewpoint.  Current American culture is awash in the liberal view point; so much so that, like a fish doesn’t realize that there is such a thing a “water” that they are immersed in, so most people who would label themselves as just left of center are actually much further left than they realize. This leads them to view as Nazis people who think of themselves only center-right or mildly conservative.

How does this affect media bias?

Both liberals and conservatives have a template, or narrative, that frames their worldview.  Both will cover news (or cover news in a way) that makes their side look good, or makes the other side look bad.  In other words, they fit their coverage to into the template they’re following.

However, if the New York Times newsroom was staffed with ex-military, evangelical Christians who always vote Republican, liberals would never believe that this group could be unbiased.

And you know what? They wouldn’t be unbiased.  Their bias would creep in, in the same way that liberal bias creeps in.

Consider an example I saw just today:  Bloomberg (which in the media bias chart is slightly right of center) had an article today on refugees from Venezuela and the discrimination they feel in the countries they’re migrating to. The article makes it seem that Venezuela’s economic problems come solely from low oil prices and mismanagement.  But conservatives would argue that the price of oil only exacerbated problem cause by Chavez’s socialist control of the economy and that the economy would collapse eventually anyway because, paraphrasing Margret Thatcher, “the problem with socialism is that eventually you run out of other people’s money”.  But since this doesn’t fit the liberal template that socialism is good and capitalism is bad, it wasn’t mentioned in the article.  So while the article was factually true, written with an even expression, and showed no obvious bias, conservatives would consider the article sorely lacking and misleading.

Is it possible to eliminate bias from media?  I would say no.  I would go further to say that it would be bad not to have different viewpoints.  But I do object to media sources who imply that they are unbiased, when they aren’t, and they may not even be aware of it.

For the individual, then, the solution is to read sources from both sides and consider the implicit or explicit biases.  This is much easier for conservatives; we can pick up almost any magazine or newspaper, or listen to almost any news report from the mainstream media and get our fill of news from a liberal perspective.  Liberals will have to search out quality conservative news and opinion, such as the National Review and The Weekly Standard from the chart, or Hot Air and Townhall, which are not on the chart but which I also like.  Also, Prager University which is less current events and more of a conservative tutorial.

The truth is out there, somewhere.

This entry was posted in Politics. Bookmark the permalink.